Information on VAT and taxes 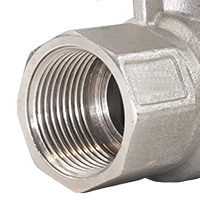 To ensure compatibility and ease of maintenance, threads are standardized. For existing and new applications, it is necessary to identify the thread type to guarantee a proper connection of the joint.

How to identify an unknown thread type? 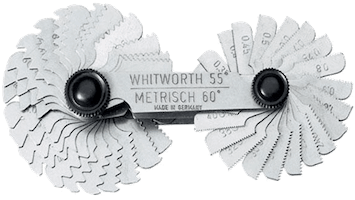 To identify an unknown thread, verify the following:

Next, take this information and look at the common thread types below and their tables to find the correct thread type that you have.

The BSP, or Whitworth thread, is a family of thread standards that has been adopted internationally, except in the United States. This thread form is based on a 55° V-thread with rounded roots and crests, as seen in Figure 2. For a thread that conforms to BSP, the major diameter of the pipe thread is slightly smaller than the actual OD of the pipe, and the minor diameter will be very close to (smaller than) the inside diameter of the female thread. There are two types of BSP threads:

BSP threads are identified with letters each of which represents the type of thread and their associated standards1:

The actual sizes of the most commonly used BSP threads are listed in Table 1 and Table 2 for BSPP and BSPT threads respectively. Table 3 provides data on pipe sizes associated with these threads.

Note: Each thread size is identified with a number which has little to do with the actual size of the thread. This discrepancy originates from amendments in industrial practices and standardisation throughout the history of standardisation of pipe threads. Therefore, always compare measurements with actual sizes listed in the tables. 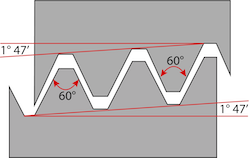 Figure 4: NPT thread profile mating with the top being a fitting internal thread and the bottom being a pipe external thread.

The American national pipe thread was created based on a 60° V-thread with flattened peaks and valleys (Figure 3) and is widely used in the US and Canada. There are two types of NP threads:

National pipe threads are designated with their nominal size (3/8) followed by number of threads per inch (18) and the symbol for the thread series (NPT).

Metric threads come in two different pitch sizes for a given diameter:

Labeling Example: M8
This refers to a metric coarse thread with a diameter of 8 mm (which with reference Table 5, corresponds to a pitch size of 1 mm)

Labeling Example: M4 x 0.5
This indicates a fine thread with a diameter of 4 mm and a pitch size of 0.5 mm.

In the United States and Canada, the Unified Thread Standard (UTS) describes a standard thread form and series, as well as the allowances, tolerances, and designations applied to screw threads. Bolts, nuts, and other threaded fasteners are standardized according to this standard.

The flank angle on unified screw threads is 30°, and the threads are symmetrical. As a result, they are commonly called 60° threads. In fact, the UTS thread has the same 60° profile as an ISO metric screw thread, but its characteristic dimensions (outer diameter and pitch) are designated as an inch value rather than a millimeter value. The UTS standard is controlled by the American Society of Mechanical Engineers (ASME) and the American National Standards Institute (ANSI)

The unified thread standard has three distinct variances called Unified Coarse Thread (UNC), Unified Fine Thread (UNF), and Unified Extra Fine Thread (UNEF). The difference between the three is the amount of threads per inch. For example, a 1 inch fastener size in UNC has 8 TPI, in UNF 12 TPI, and 20 TPI in UNEF). For more size information see the below tables. While the sizes of ¼ inch and above are designated by their size, below ¼ inch the UN standard designates these sizes a number. For example a size 12-32 would be UNEF #12, 12-28 would be UNF #12. For more size information refer to the below pitch charts. 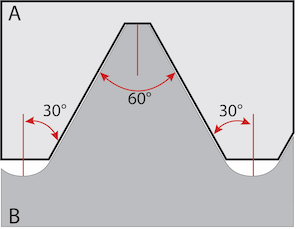 Although some BSP and NPT threads might be tightened and engaged together fairly well, pitch and thread angle differences between them will allow spiral leakage. Specifically speaking, at 1/16, 1/8, 1/4and 3/8 sizes, pitch difference results in misalignment of the threads. This misalignment might result in the threads to be fastened only partially. However, at 1/2 and 3/4 sizes, NPT and BSP have the same pitch which will allow them to engage well. Nevertheless, since there are differences in thread forms and thread angles, there will still be issues with this connection. For low end applications, if an appropriate thread sealant is used, these threads might be used together effectively. If you are creating your own thread, please read our tap and die set article. Table 6 shows the compatibility of threads and the required seal type to be used as a reference for your application.

Click one of the links below for more information:

The valve is actuated with an electric current through the solenoid (electromagnet). Electric Ball Valves:

Indirect operated solenoid valves need a pressure differential over the inlet and outlet port for proper operation. If the pressure differential is too low (f.e. a gravity fed system or a closed circuit), only (semi-)direct operated solenoid valves can be used. These operate from a zero bar pressure differential.

The type of medium defines the material choice of the valve body and seals. By selecting 'Other', you can choose the material for the valve body and seals.
Tip: Use the material table.

Most valves are provided with internal thread (BSPP = British Standard Pipe Parallel). Use the table as a guideline for sizing:

Solenoid valves are supplied with a coil of choice for alternating current (AC) or direct current (DC).
View products


Estimate based on cart value.

There are no more items in your cart